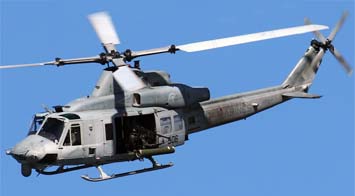 
Program Introduction
The objective is simple.

To meet the expanding mission requirements of the Marine Corps between now and the initiation of the Joint Replacement Aircraft program in the year 2020, and to do it in the most cost-effective way possible. The solution is the USMC AH-1W Super-Cobra and UH-1N Twin Huey Upgrade Program. Not only does the H-1 upgrade deliver a dramatically enhanced version of two battle-proven aircraft, it also provides life cycle program savings of at least $3.9 billion. No other program can even come close.

The H-1 program delivers in every performance category.

Both aircraft are remanufactured to take advantage of the latest technologies, with dramatic improvements in crew and passenger survivability, payload, power availability, endurance, range, airspeed, maneuverablility and supportability.

The heart of this program is the new four-bladed all-composite, hingeless, bearingless rotor system and drive train.

Now both the Super Cobra attack helicopter and the Twin Huey utility helicopter will share the same all-composite rotorsystem, drive train, engines, transmissions, hydraulics, electrical systems and tailboom. Both helicopters will share three out of every five repairable items. The savings in maintenance staffing and training, groundhandling and support equipment, and spare parts inventories are enormous - at least $3.9 billion over the life of the program.

The H-1 Upgrade Program is a practical, economical and tactically superior pathway to supporting the Marine Corps' role of "Anytime, Anywhere."

This efficient recapitalization program will result in 280 essentially new aircraft. The USMC will receive "zero-time" airframes, not just rebuilt, but remanufactured, with the latest in helicopter technology. In contrast the only competing program would result in 1970's vintage-technology aircraft, at a much higher price.

And the savings in acquisition costs are just the beginning.

The program will give USMC light attack helicopter squadrons unprecedented maintenance and logistics support benefits. With the common drive trains (GE-T700 engines, gearboxes and rotor systems), the savings from simplified training, parts, supply, logistic supportability and maintenance will be enormous. Projected lifecycle savings from now until the 2020 Joint Replacement Aircraft program are a minimum of $3.9 billion.

"We wanted to compare flight testing at Pax River to the original plan which called for testing at the contractor's facility. Our
office requested proposals from Bell Helicopter, Textron Inc., and Naval Air Warfare Center Aircraft Division," said Navy
Capt. Tom Curtis, H-1 program manager (PMA 276, USMC Light/Attack Helicopter Programs). "After evaluating the
proposals and conducting an extensive cost/benefit analysis, we determined that flight testing the AH-1Z and UH-1Y here
provided the best value for the H-1 program, the Marine Corps and the Department of the Navy. Testing here allows a higher
quality and more efficient flight test program."

"Captain Curtis' decision to flight test the Marine Corps' newest helicopters here reflects the success of our customer-focus
efforts and the great productivity improvements we've made in both engineering and test and evaluation over the last few years," said Rear Adm. Joe Dyer, NAWCAD commander. "NAVAIR has long been recognized as DOD's lead for helicopter flight testing."

The new AH-1Z attack and UH-1Y utility helicopters are in their final phases of development. The first aircraft to fly are
undergoing final assembly and ground testing at the Bell Helicopter, Textron Ft. Worth, Texas facility. Bell is the prime
contractor for the re-manufacturing program that will revolutionize the existing inventory of Marine Corps AH-1Ws and
UH-1Ns into 21st century designs.

The first AH-1Z, referred to as Z1, will launch on its maiden flight at the Bell Helicopter plant in Ft. Worth, Texas in the fall of
2000. The first UH-1Y, Y1, and the second Cobra, Z2, are scheduled to be completed in the late fall of 2000. Then the first
three aircraft Z1, Z2 and Y1 will be delivered here in early 2001 by U.S. Air Force cargo aircraft. Upon arrival, Y1 and Z2
will conduct their first flights at Pax River. The last two test aircraft, Y2 and Z3, will be delivered here for their maiden flights
later that year.

This approach still captures all of the data required during dedicated contractor, DT and OT testing, while shaving about six
months off the test schedule. Integrated testing also permits early identification and correction of problems found during the test
program. Further, by taking advantage of the fact that the AH-1Z and UH-1Y share more than 85 percent of their mechanical
and avionics components, linking the AH-1Z and UH-1Y testing allows a similar reduction in test time by eliminating redundant
test flights between the two types of aircraft.

Weapons testing will be conducted at the Yuma Proving Ground, Yuma, Ariz., while high altitude and hot weather testing will
be in a location yet to be determined, said Curtis.

Another significant aspect of the H-1 Upgrade test program is the combined Operational Test Team formed from the Navy and
Marine Corps test and evaluation units. Currently, VX-9, located at NAWC-Weapons Division China Lake, has OT
responsibility for attack helicopters (AH-1) and HMX-1 at Marine Corps Air Station Quantico, has the OT responsibility for
utility helicopters.

In this program, these two units will staff a combined Operational Test Team (also sited at Pax River) to conduct the
operational portions of the testing.

"Conducting a combined OPEVAL is more in line with the way the two aircraft are employed in the fleet," said Maj. Lindy
Kirkland, deputy program manager for H-1 upgrades. "The Marine Corps operates both aircraft in the same squadrons, using
the same maintainers to work on them, so it makes sense that we should test them like we intend to use them ... together."
During the OPEVAL, the AH-1Z and UH-1Y will be evaluated in realistic deployment-type exercises.

The OT team at Pax will fly continuously during DT, said Curtis. During this final test sequence, Marine Corps maintenance
personnel will maintain Z3 and Y2. That way, the maintainability and supportability of the helicopters can be realistically
evaluated.

A total of five helicopters will be built for the flight test program -- three AH-1Zs, two UH-1Ys and two non-flying test articles
(one of each type). The test program should be completed by the summer of 2002.

The Marine Corps newest attack helicopter, the AH-1Z was rolled out Monday, November 20, 2000, in a ceremony at Bell Helicopter Textron's Flight Research Center in Arlington, Texas.

The AH-1Z is the world's most advanced attack helicopter and is part of the H-1 Upgrade Program. This program will remanufacture 100 UH-1N transport helicopters and 180 AH-1W Super Cobra attack helicopters to an advanced configuration featuring common engines and flight dynamic components.

The H-1 Upgrade Program will result in 280 new aircraft for the US Marine Corps to operate beyond 2020. These will have "zero-time" airframes remanufactured with the latest technology. The speed, range, maneuverability and lift capability of both aircraft will be dramatically improved. The savings in maintenance training, ground handling, support equipment, and spare parts inventories add up to billions of dollars over the life of the program.

Current advanced technology will provide the H-1 Fleet with increased battlefield survivability and greater mission success with fewer combat losses. In addition the crashworthiness of both the UH-1Y and the AH-1Z is significantly enhanced.

Some of the upgrades include an enormous amount of commonality between the two aircraft (more than 85 percent). This includes the state of the art common glass cockpit, the GE-T700 engines, four blade all composite, hingeless, bearingless main rotor system and tail rotor, identical drive trains, hydraulics and electrical distribution systems.

By utilizing common systems the cost of the logistics support process for the two helicopters will be dramatically reduced and will allow for vastly improved shipboard operability. Far less critical shipboard space will be needed to store spare parts and support equipment to support the two helicopters.

Litton Guidance and Controls is on the H-1 Team as the supplier of the Integrated Avionics System (IAS). Litton will integrate and provide equipment such as the color multi-function displays, mission and weapons computers, advanced communication and navigation equipment, and all of the software that makes these units function with each other automatically. This integrated system will take a lot of the workload off the crew and let them concentrate on safely flying the aircraft and fighting the enemy.

The program to upgrade the Marine Corps' AH-1W Super Cobra and UH-1N Iroquois ("Huey") helicopters by fitting them with four-blade rotors and incorporating other improvements (helmet-mounted displays, for example) is on schedule, according to Bell Helicopter Textron officials.

The remanufactured aircraft--now designated AH-1Z and UH-1Y--are expected to begin flight testing in October and November 2000, respectively. Four helicopters are awaiting modification at Bell; airframe assembly began in April. Bell expects to complete airframe fatigue tests this year, and will supply some components to the Naval Air Warfare Center's Weapons Division at China Lake, Calif., for live-fire testing. Bench testing of the drive train for the helicopters also is scheduled to begin later this year.

The upgrade program will improve the capabilities of some 100 AH-1W and 180 UH-1N helicopters expected to enter service by 2004 and operate beyond 2020. An unspecified number of unarmed HH-1N rescue versions also may be included in the modification program. Among the systems and equipment that will be common to both the AH-1Z and the UH-1Y will be their General Electric T700 engines, four-blade composite hingeless and bearingless main rotor systems and tail rotors, drive trains, hydraulics, and electrical systems.

Litton Guidance and Controls has been selected to upgrade the cockpits of both aircraft into a common configuration so that Marine Corps aviators assigned to light-attack helicopter squadrons--which fly both types of aircraft--can easily switch from one cockpit to the other. The use of a common cockpit--which will be equipped with multifunction color displays--also will lighten the training workload for pilots and reduce maintenance and logistics costs for the two types of aircraft. In the case of the AH-1Z, the new cockpit also will permit a better balanced workload between the pilot and the gunner.

Lockheed Martin has been selected to supply the Target Sight System (TSS) for the AH-1Z. The TSS features a high-resolution television, a Litton laser range finder, and a third-generation FLIR (forward-looking infrared) system that operates in a passive mode and can track targets beyond the range of the Hellfire missiles carried by the AH-1. Lockheed officials say that the TSS offers the longest detection, recognition, and identification ranges of any sight now available or in development.

Among other modifications and add-ons now planned for the AH-1Z are two additional wing stations that will carry an additional 50 gallons of fuel. Both types of helicopters also will be fitted with a more powerful transmission system and a semiautomatic blade-fold mechanism.

Customers (Kunden)
The US Marine Corps will upgrade 100 of its UH-1Ns to the new standard.

Remarks (Bemerkungen)
The UH-1Y is the lastest in a long range of "Huey" transport helicopters. It is based on the UH-1N currently serving with the US Marine Corps, and existing airframes will be rebuilt to the new standard, which includes:
four-bladed main rotor (composite blades)
General Electric T700 engines, giving 100 per cent more power than before
aluminium transmission cases to reduce corrosion
fuselage stretch behind the cockpit to make room for avionics
new, integrated avionics suite, including GPS and digital map system
self protection system with radar, laser and infrared missile warners, engine IR suppression, an IR jammer and countermeasures dispenser
The UH-1Y programme runs in parallel to the AH-1Z SuperCobra, with the aim of achieving at least 85 per cent commonality of major components.
Bell first proposed its UH-1N upgrade to the Marine Corps in the spring of 1994. Pre-design and configuration studies were then undertaken from the end of 1995. After much debate, during which Sikorsky promoted its UH-60 Black Hawk in a multi-service buy, a development contract for the UH-1Y (then dubbed the UH-1(4B)N) was awarded in January 1997, valued at 134 million US-Dollars. The critical design review is scheduled for September 1998.
Bell will modify two UH-1Ns to the new standard for flight testing and evaluation. The first flight is expected in November 2000.
Pending the award of a low-rate initial production contract in February 2002, deliveries will begin in 2004 and are to run until 2013.